YOUNG ADULTS AND THE FUTURE OF CHICAGO

In the summer and fall of 2017, researchers from the GenForward Project at the University of Chicago interviewed 200 young adults between the ages of 18 and 29 from across the city. The voices of young African Americans, Asian Americans, Latinxs, and whites were evenly represented. These young adults spoke about their experiences, opportunities, and challenges in the city, as well as their hopes and dreams for themselves, for their communities, and for Chicago. 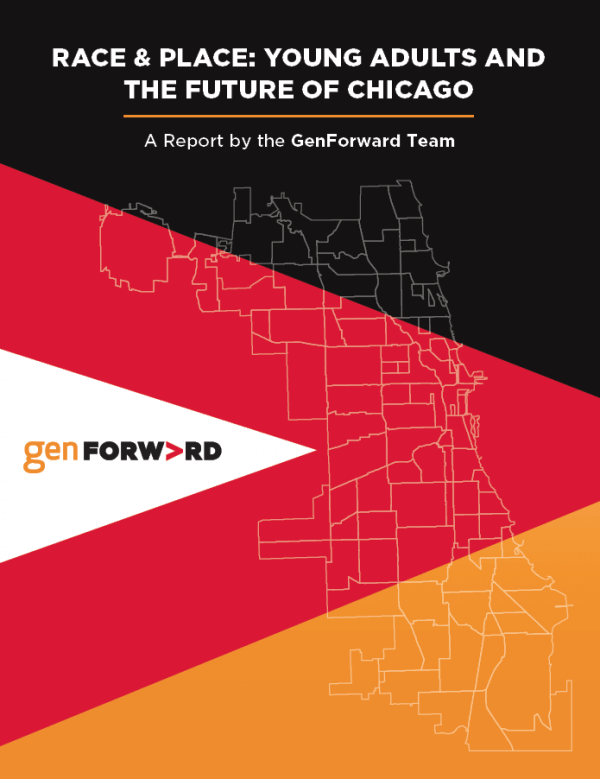 Race & Place: Young Adults and The Future of Chicago

In the summer and fall of 2017, researchers from the GenForward Project at the University of Chicago interviewed 200 young adults between the ages of 18 and 29 from across the city. The voices of young African Americans, Asian Americans, Latinxs, and whites were evenly represented. These young adults spoke about their experiences, opportunities, and challenges in the city, as well as their hopes and dreams for themselves, for their communities, and for Chicago.

To fully understand the experiences and prospects of young adults in Chicago, we must reckon with the city’s history of racial exclusion and institutional racism. These histories come together to make Chicago an epicenter for the study of race and inequality in the United States. As will be shown in this section, race—the idea that people are members of distinct groups based on differences in skin color, hair texture, and other features—is among the most powerful concepts shaping American society. Race, of course, has no biological basis. But systems and institutions use race to sort and confer differing levels of advantage and disadvantage. In doing so, systems and institutions give the idea of race social meaning and unimaginable influence over social, political, and economic outcomes.

Geography is an important factor in understanding the varying degrees of access to quality schools in Chicago. While a variety of school types comprise the educational landscape of the city, Chicago Public Schools (CPS) plays a formative role in structuring educational opportunities across neighborhoods. The district currently serves over 360,000 students, 86% of which are African American and Latinx. The number of students enrolled in CPS has decreased significantly over the past two decades. Just 10 years ago, for example, district enrollment hovered above 400,000 students. Population loss and the corresponding decline in enrollment has been used to justify school closures that have disproportionally affected South and West Side communities in the city.

Chicago is a city of precarious economic circumstances. Although the city has one of the largest metropolitan economies in the United States, it also has high, outstanding long-term debt, the highest per-person pension debt among the nation’s largest cities, and high outflows of high-income taxpayers leaving the city. While Chicago’s many economic opportunities and amenities are attracting a migration of young adults to the city, this debt and loss of income tax requires Chicagoans to pay more fees and taxes than any other city in the United States. Young adults are impacted differently by this paradox of economic opportunity and debt in the city.

Gentrification, Displacement, and the Politics of Place

As in other major cities around the nation, Chicago’s neighborhoods are changing—with important consequences for the demographic and political future of the city. Administrative and survey data provide a sobering description of these trends: Since the post-recession economy improved after 2012, the share of low-income renter households fell and then stabilized, while the share of high-income renter households in the Chicago area has continually increased.Among low-income renters in the Chicago area, nearly 90% are rent-burdened, meaning that they pay 30% or more of their income on rent. Nearly half of African Americans in Chicago have been evicted, foreclosed upon, or lost their housing—or know someone who has faced one of these situations—within the past five years, compared to 38% of Whites and 39% of Latinxs. Over 113,000 applicants—about twice the total number of city households who receive government rental assistance—are on waiting lists for public housing or housing vouchers in Chicago. In short, even as more affluent people move to Chicago, a number of others are living in vulnerable situations and in need of greater assistance.

Perhaps more than any other large city in the nation, Chicago is defined by vastly uneven levels of exposure to aggressive policing and violence. These two issues disproportionately affect the lives of African Americans in the city. For example, although African Americans constitute roughly 30% of the population of Chicago, over 70% of the individuals stopped by Chicago police in 2016 were African American. This is a far greater proportion of African Americans being stopped by the police than in New York City, which recently made national news for its discriminatory stop-and-frisk practices. In their investigation of the Chicago Police Department (CPD), the U.S. Department of Justice suggests that the CPD’s practice of disproportionately stopping black people is related to its tactical approach to proactive policing, which prizes “aggression, hustle, and effort” yet leads to the unfair pursuit and criminalization of black and brown young people. According to the Justice Department, these disparate interactions and systemic deficiencies lead to the harms of unreasonable and excessive force. Thus, where Chicagoans live and their racial and/or ethnic identity significantly determines if and how they will interact with the police.

In a city like Chicago, much of the politics goes through and is controlled by the city council and, more specifically, by one’s local alderman. In our interviews with young people, the politicians referenced most often were the mayor and the Chicago City Council aldermen. The Chicago City Council, a legislative branch of the city government, is divided into 50 districts or wards that are each represented by one aldermanic representative. The constituents of each ward elect this representative to serve a four-year term.

Chicago is frequently portrayed as a city of deficits: gang violence and homicides capture the attention of media outlets and the entertainment industry alike; bond-rating firms label the city’s credit as “junk;” and schools are portrayed as “crumbling” and “failing” despite academic gains. As previous sections of this report have emphasized, these challenges are real and worthy of scrutiny. However, addressing these topics in the detail they deserve risks painting a unidimensional portrait of the city. One study finds that many Chicagoans feel that media coverage of the city is too negative and does a poor job of capturing what is actually happening in their neighborhoods. This is especially true among residents living on the city’s South and West Sides. Our conversations with young Chicagoans allow us to identify stories that typically go unrecognized. Young people of color in particular are well aware of the challenges facing the city. However, they also remind us that individuals living on the city’s South and West Sides continue to experience joy, exercise agency, and possess a great deal of pride in their communities even in the face of harsh inequities. Alternative representations of what it is like to live on the South and West sides of the city not only complicate our image of Chicago but lend important insights to policymakers. As the city grapples with continued population loss, city leadership should be attuned to the emotions young people ascribe to their communities. Freedom, agency, and feelings of safety and joy play an important role in how young adults envision their futures in Chicago.

Check out our press coverage on Race and Place below!