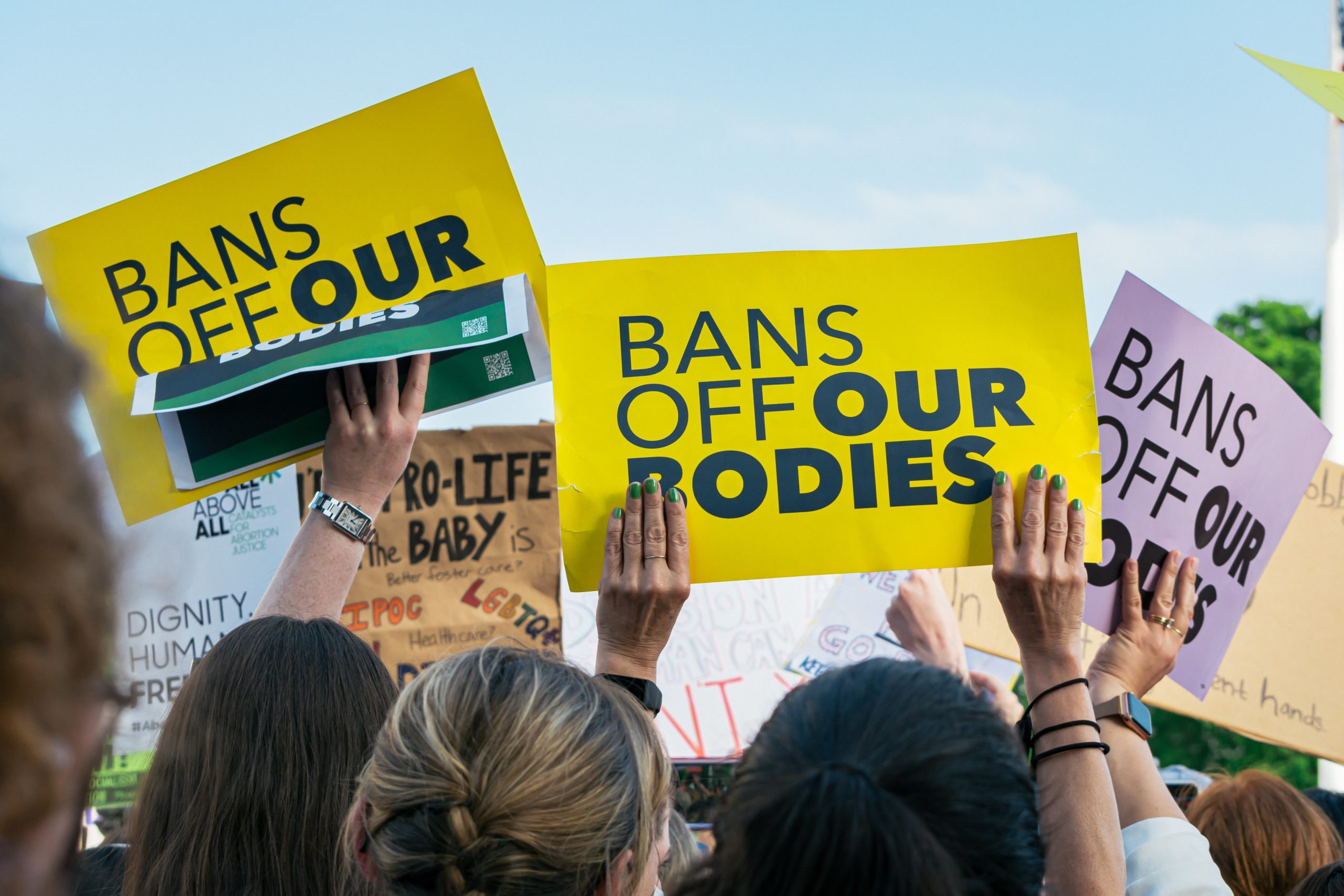 By Vlad MedenicaAugust 30, 2022No Comments

Highlights from the July 2022 Survey

The July 2022 GenForward Survey asked over 2000 (2,555) young adults between the ages of 18 and 40 about their views on the economy, the upcoming midterm elections, abortion, privacy rights, the January 6th Committee hearings, and more. Due to the racial and ethnic diversity of young adults and the importance of those identities in structuring peoples’ experiences and opinions, our surveys are specially designed so that we can more accurately understand and compare responses by racial and ethnic groups. Here, we present a short overview of the results. To view full crosstabs and methodology, please visit our data page. 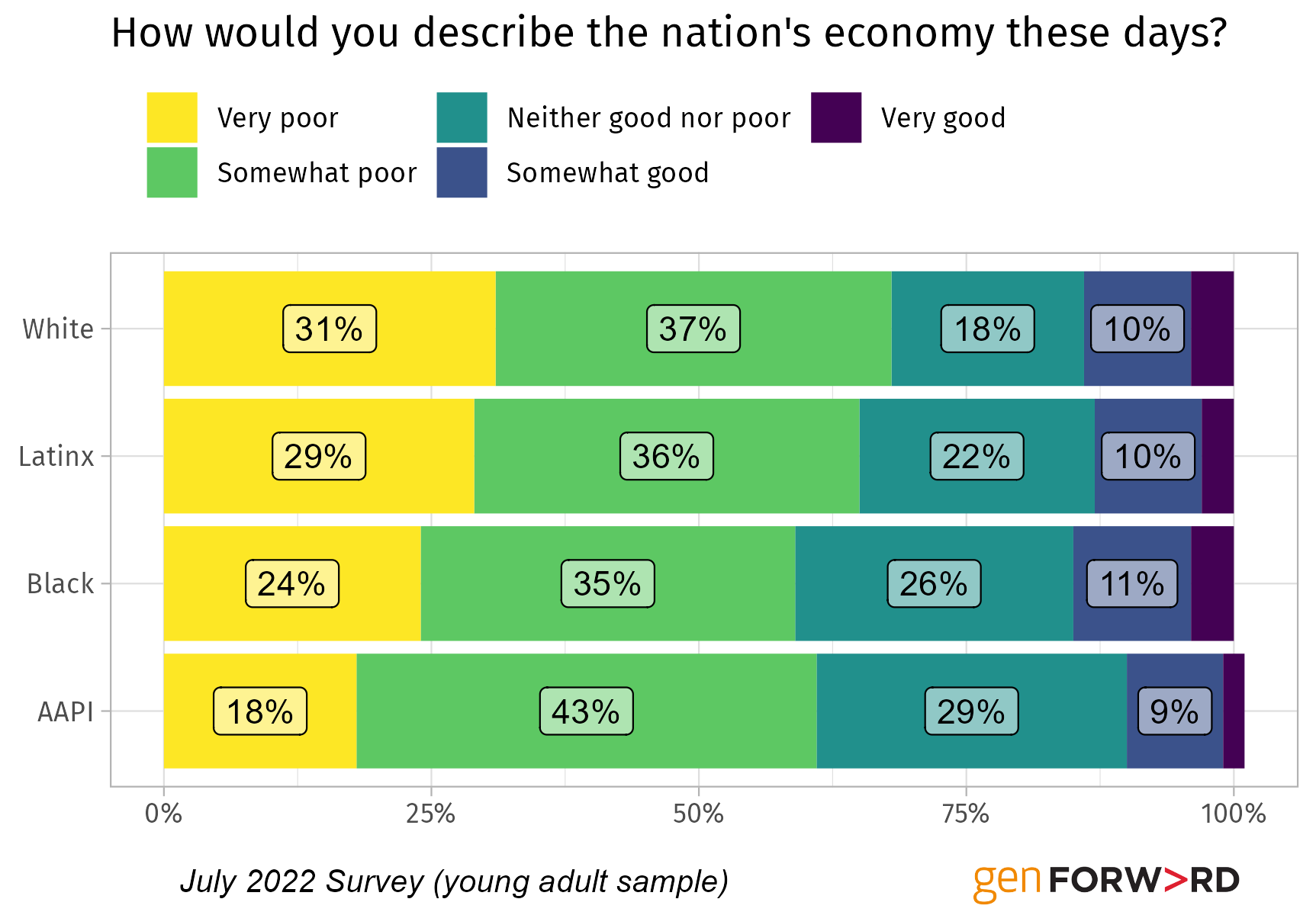 Amid rising prices and record inflation, only 14% of young adults described the U.S. economy as either somewhat or very good. Instead, the majority of young adults (65%) indicated that the nation’s economy was doing poorly and an even greater majority (87%) felt that inflation was having an impact on them and/or their families. Views did not differ significantly across racial and ethnic groups. 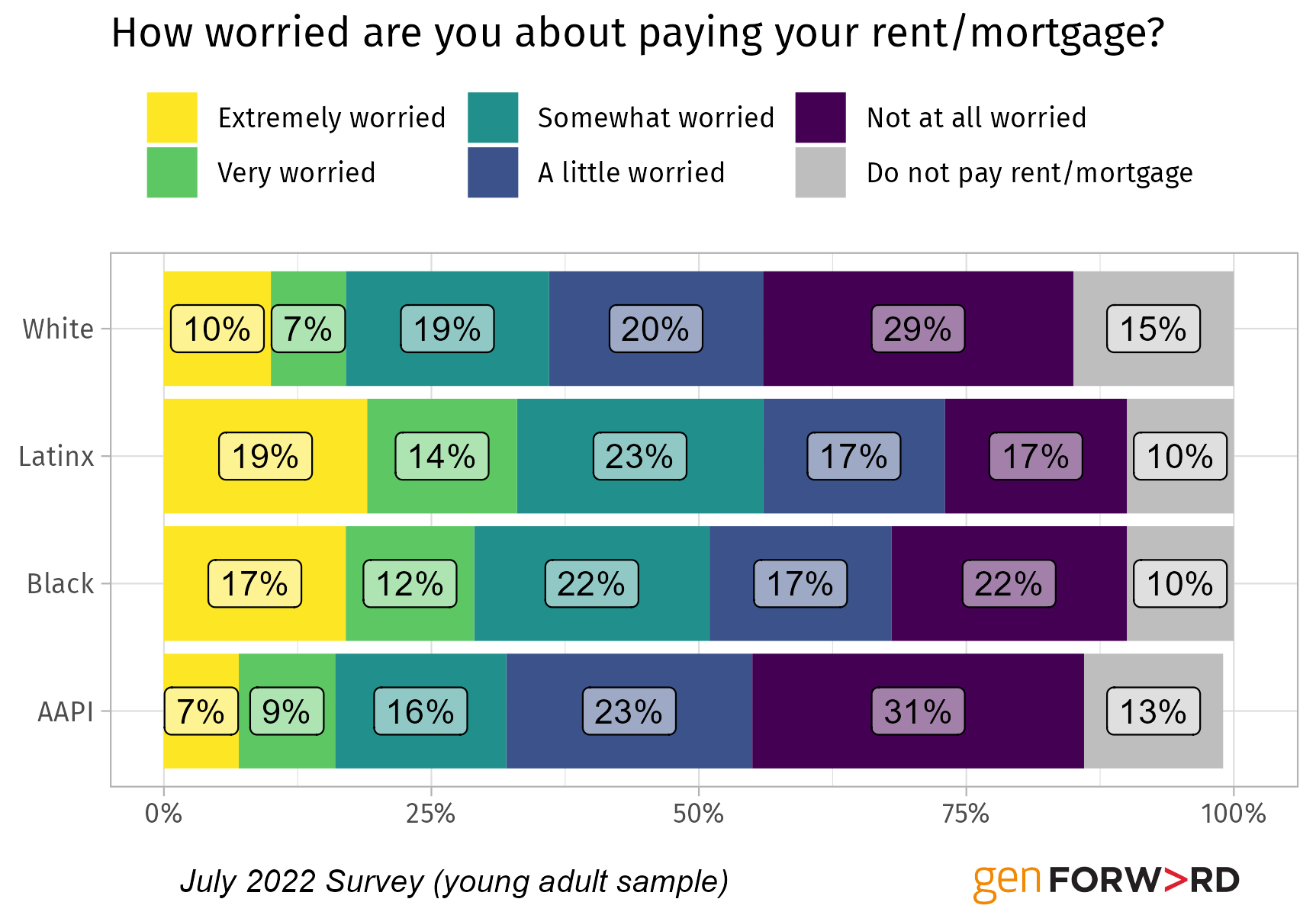 General evaluations of the economy were relatively consistent across racial and ethnic groups. However, there were important differences in how economic conditions affected peoples’ lives. For example, over half of Black (51%) and Latinx (56%) young adults reported feeling at least somewhat worried about being able to pay their rent or mortgage while far fewer white (36%) and AAPI (32%) respondents shared those concerns.

When asked about the most important issue for the upcoming midterm elections, pluralities (16-21%) of young adults across racial and ethnic groups selected inflation as their top priority. Gun violence emerged as the second-most important issue for Black (13%) and Latinx (13%) respondents while abortion and reproductive rights came in second among AAPI (15%) and white (16%) young adults. 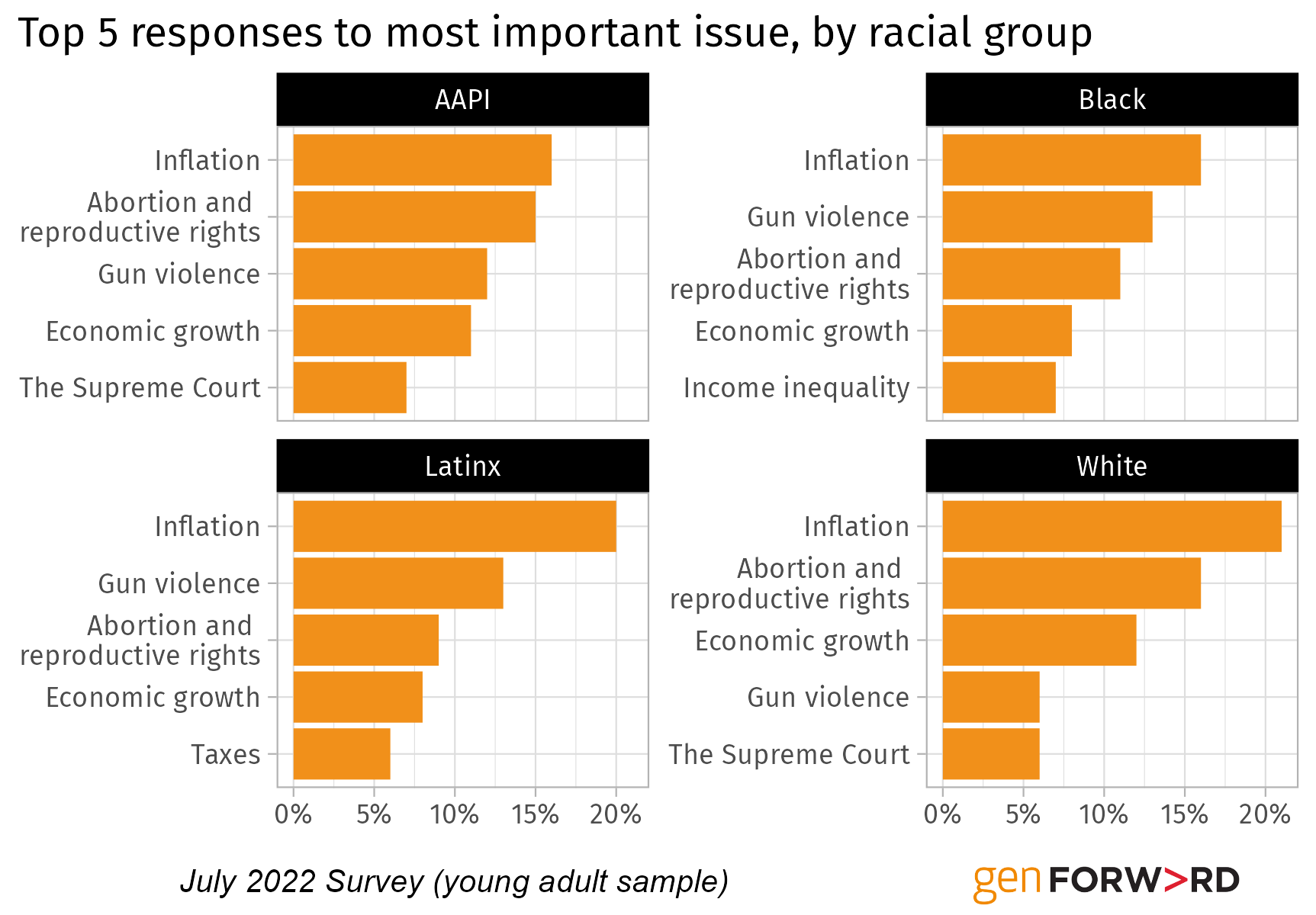 Focusing solely on Democratic and Republican candidates offers only a small peek into the political views of young adults. Sizeable percentages of Black (33%), Latinx (34%), AAPI (29%), and white (28%) Americans report supporting neither the Democratic or Republican party candidate or a candidate of another political party. Even when we asked those who didn’t select a party which one they leaned towards, three-quarters did not state a preference. 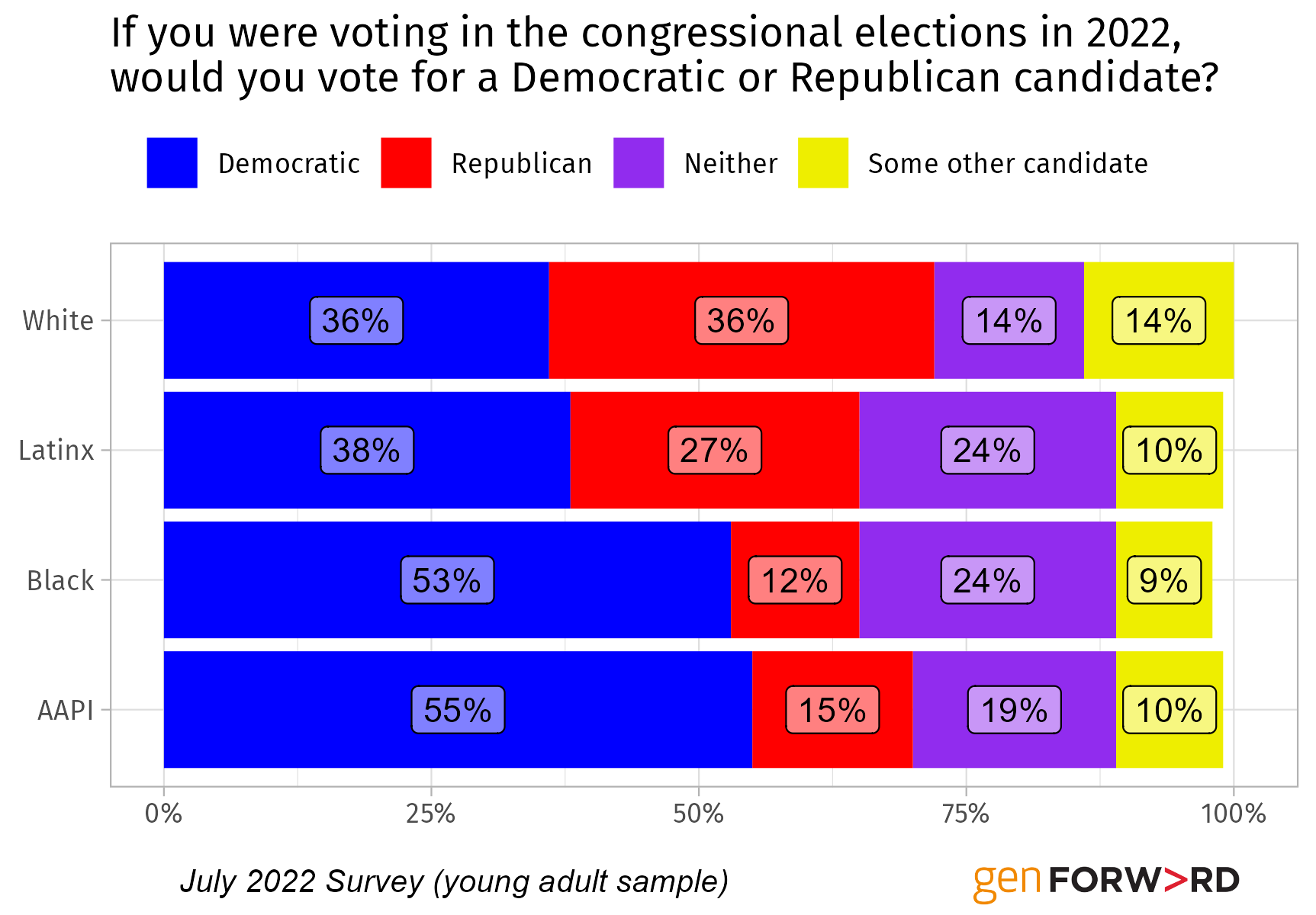 Approximately 39% of young adults in our survey indicated that they “definitely will vote” in the 2022 midterms. The percentage of respondents reporting a definite intention to vote was higher among whites (42%) compared to Black (37%), AAPI (38%), and especially Latinx (33%) young adults. 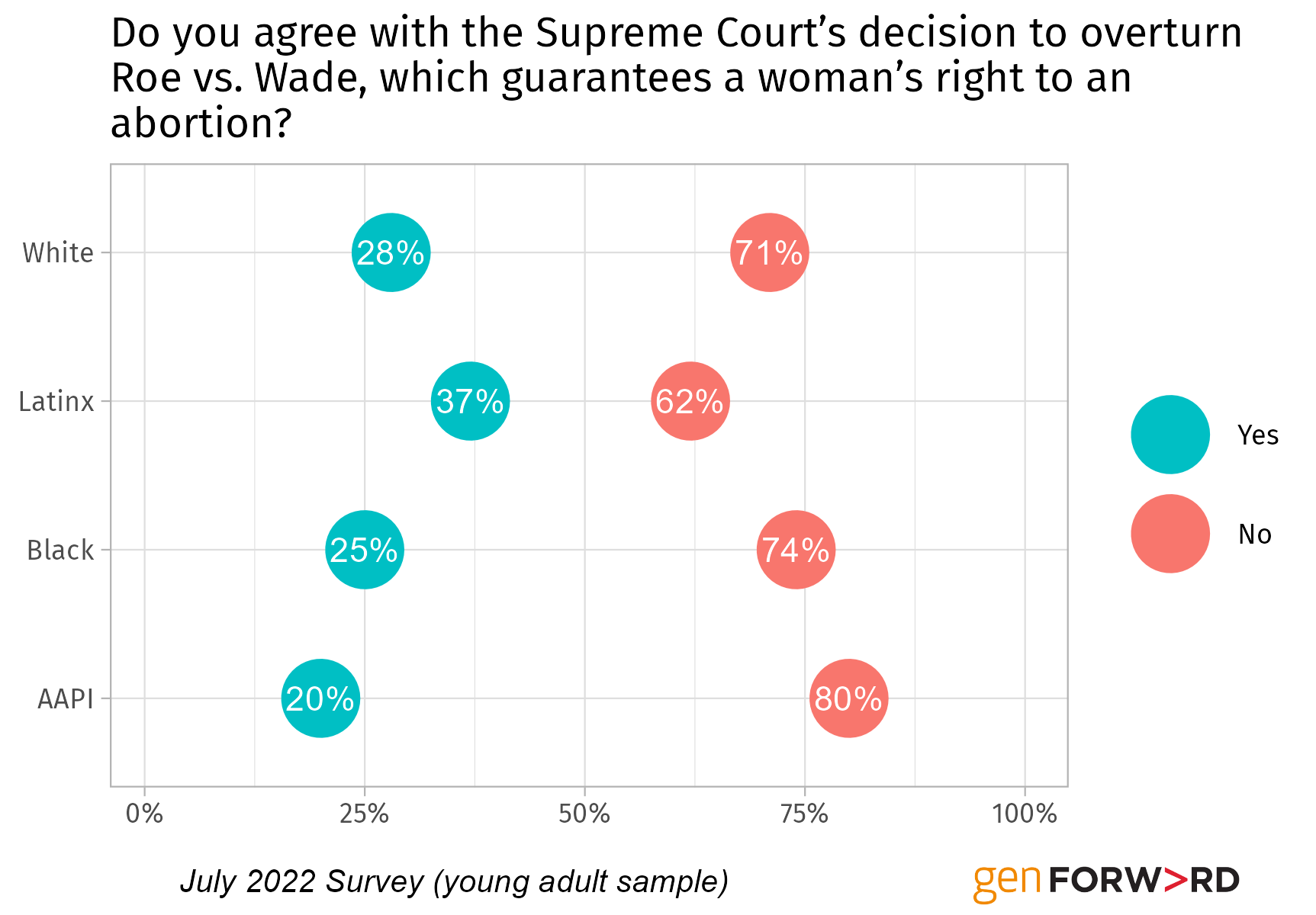 Young adults generally reported substantial support for abortion access, though there is important variation and nuance in their views. For example, clear majorities of Black (58%) and AAPI (62%) respondents in our survey believed that a woman should always be able to obtain an abortion by law as a matter of personal choice without exceptions. This view was less widely shared among white (51%) and especially Latinx (46%) young adults, who were more likely to support access to abortion in restricted cases such as rape, incest, and danger to the pregnant person’s life.

In the event that an abortion is performed in a state where abortion is illegal, majorties of young adults believed that neither the woman (65%) nor the doctor (58%) should be penalized. However, some respondents did support sentencing women who received abortions to penalties such as doing community service (11%), paying a fine (10%), and serving jail time (13%). There was also some support for penalizing doctors who perform abortions in states where it is illegal by mandating they do community service (7%), pay a fine (20%), lose their medical license (16%), or serve time in jail (18%). Larger percentages of Latinx (14% for woman, 22% for doctor) and white (15% for woman, 19% for doctor) respondents supported the most punitive of punishments, serving jail time, compared to their Black (9% for woman, 14% for doctor) and AAPI (8% for woman, 10% for doctor) peers.

The overturning of Roe v. Wade opened the door to discussions on whether the Supreme Court should reconsider other issues related to a person’s right to privacy, namely access to contraception and same-sex marriage equality. We asked about these issues in our survey and found that majorities of young adults did not believe that SCOTUS should reconsider either access to contraceptives (60%) or same-sex marriage (66%). This was especially true among those aged 18-26 compared to those aged 27-40. 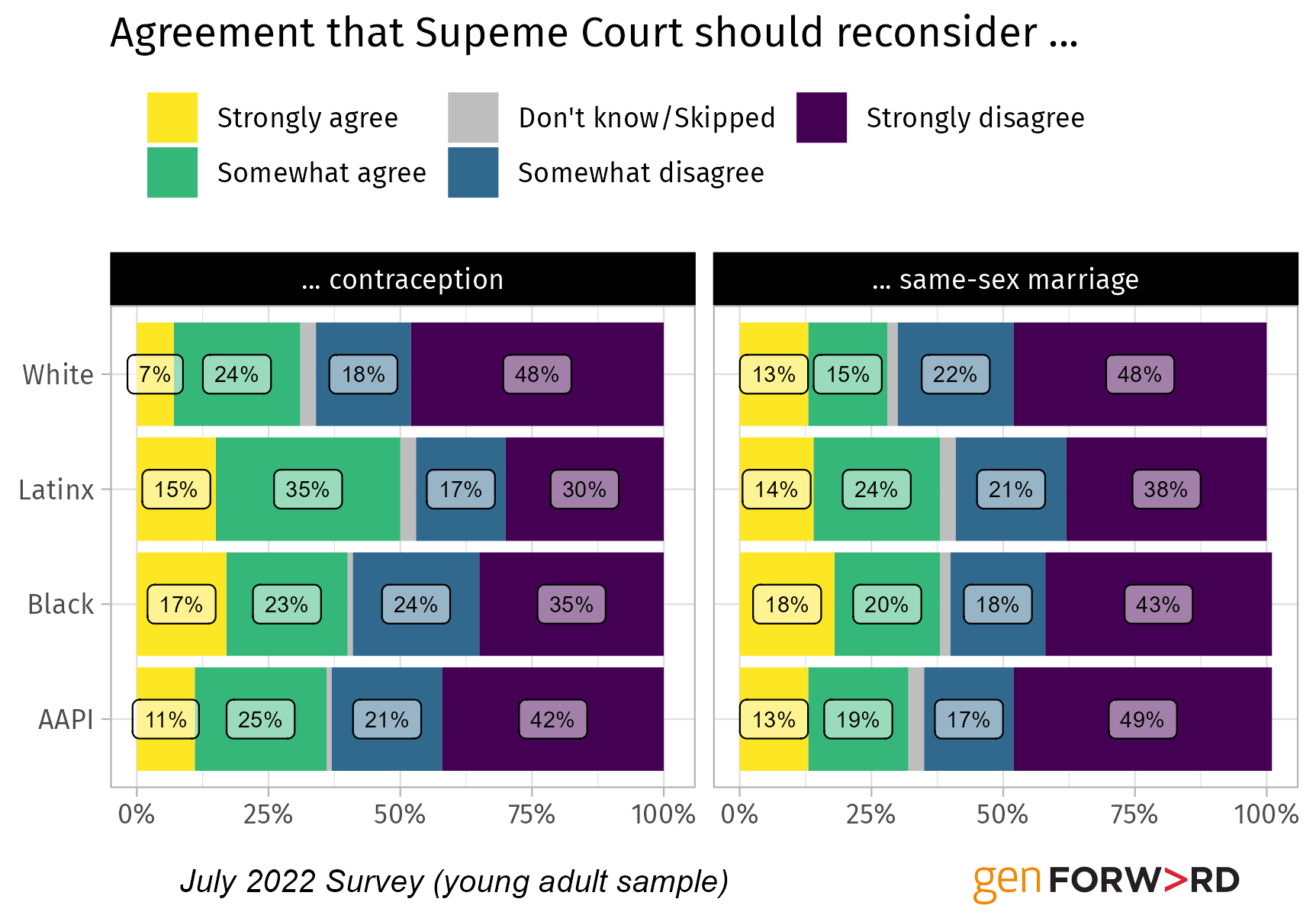 Majorities of Black (68%), Latinx (60%), AAPI (67%), and white (58%) young adults viewed the January 6th insurrection as part of a conspiracy to overturn the 2020 presidential election and the vast majority of young adults in our survey (89%), even among Republicans (72%), believed former President Donald Trump should be prosecuted for crimes related to trying to overturn the 2020 election results. 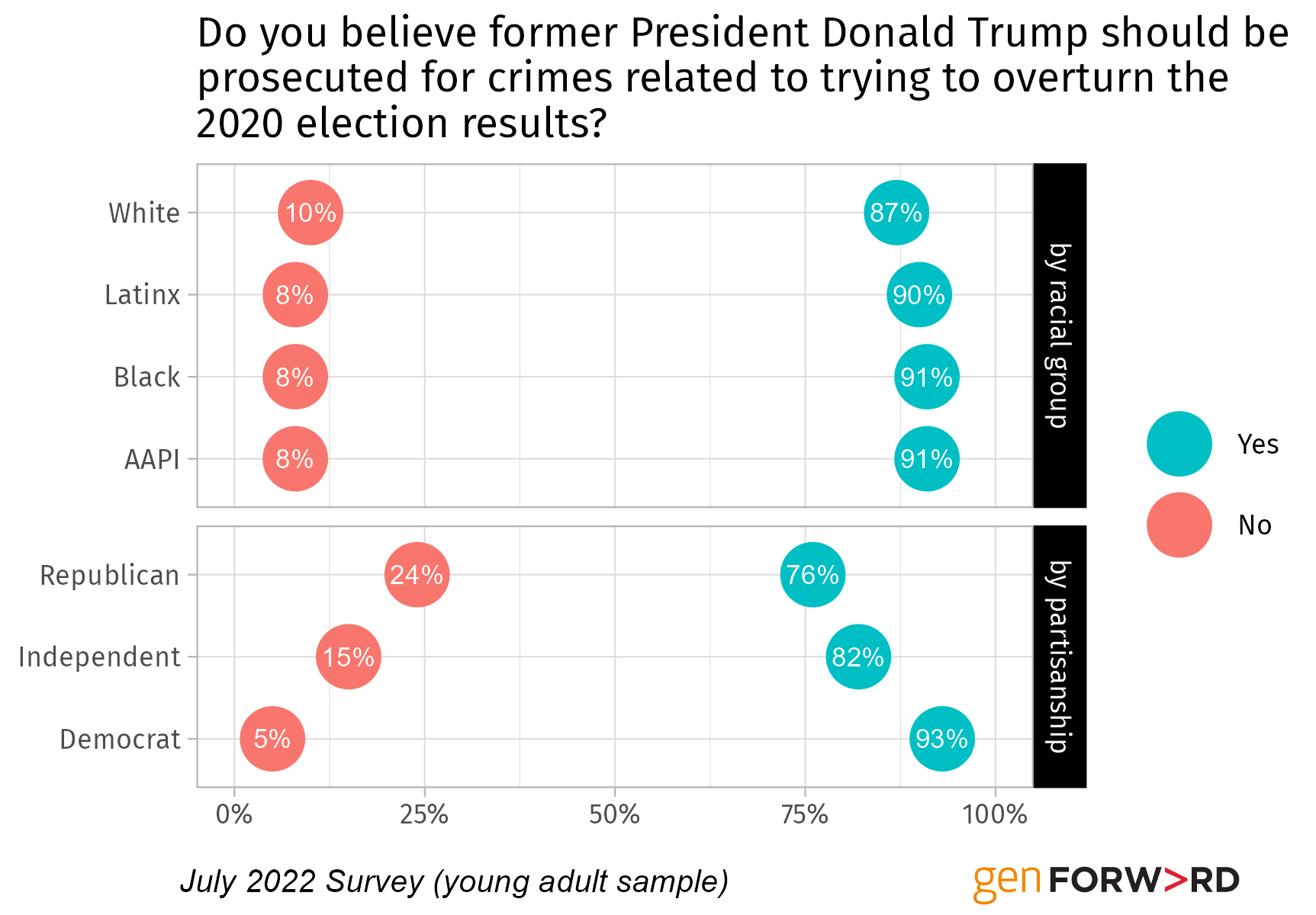