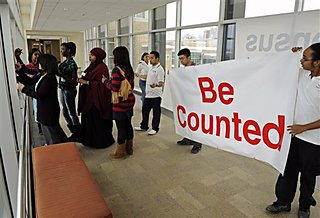 Colleges, universities and their surrounding communities have a financial interest in making sure all of their students get counted in the census, so public relations campaigns like the one at Metropolitan State are popping up all over the country.

The stakes are high. The government uses census data to apportion seats in Congress and dole out about $400 billion annually in federal funds. It’s also used in federal tuition grant and loan programs, so a thorough count of college students in 2010 can mean more money for higher education in the state down the road. (Read more)

Dikembe Mutombo, former NBA player and activist, has been chosen by the U.S. Census as a National Profile Partner. In his role, he will work with the Census and create outreach strategies to increase overall participation in the Census among African and African-American communities and also utilize the Census information for outreach projects to improve the quality of life for the people in the Democratic Republic of the Congo. The Dikembe Mutombo Foundation is dedicated to equality and empowerment for all people, with a focus on those in the Congo. (Read more)

Caribbeans Urged To Write In Ancestry On US Census
Associated Press via CBS News.com | February 24, 2010

MIAMI (AP) – Identify yourself as being of “Hispanic, Latino or Spanish origin” on the 2010 U.S. Census questionnaire, and you will get to be more specific about your ancestry, such as Mexican-American, Cuban or Puerto Rican.

But check the box for “black, African-American or Negro” and there will be no place to show whether you trace your identity to the African continent, a Caribbean island or a pre-Civil War plantation. (Read more)

An urban-versus-rural battle is brewing over the census because prison inmates are counted as residents of the prisons where they are locked up. That inflates the population of the mostly white, rural towns that have the prisons.

New Option For the States On Inmates In the Census
Sam Roberts, New York Times | February 10, 2010

‘Most people in prison in America are urban and African-American or Latino,” Representative William Lacy Clay, a Missouri Democrat who is chairman of the census subcommittee, wrote the bureau, but the 2010 census “will again be counting incarcerated people as residents of the rural, predominantly white communities that contain prisons.’ (Read more)

According to the most recent U.S. census, the number of people identifying as mixed race is growing. California’s mixed-race population, by percentage, ranks fifth in the nation, and data from the 2008 U.S. Census Bureau’s American Community Survey estimates that more than 4 percent of Bay Area residents identify as belonging to two or more races.

Though that number may seem low and could be attributed to people of mixed heritage choosing to identify with one race, a look at the Bay Area’s diversity suggests the 2010 census could reveal much higher numbers.

“More than anything, it reflects sort of an ambivalence about what it takes to participate,” says Michael Dimock, associate director of the Pew Research Center for the People and the Press. “People don’t necessarily have concerns about the Census other than how they’ll do it. There’s a lack of awareness. Some don’t really know what’s coming.” (Read more)

This year census workers and forms will make their way around the country taking stock of the population growths and shifts. When choosing ancestry, some will be asked to choose between African American, Black or, Negro and are surprised to see the word Negro showing up on census forms. To get a sense of why it’s there, host Michel Martin speaks with Stanford University sociology professor Matthew Snipp, who works for the Census Bureau and is Director of the Center for Comparative Studies in Race and Ethnicity at Stanford University. (Listen here)

‘The 2000 Census overlooked 1 million people of color, more than 600,000 of whom were African American. The distribution of federal funds to state, county and municipal governments and the distribution of political power at every level of government depend on the Census. With just over 100 days until April 1st 2010, Census Day, improving the accuracy of the 2010 Census is of critical importance to the Black Diaspora. We cannot afford to be excluded from the count again in 2010,’ said John Payton, Director Counsel and President of the LDF. (Read more)

As organizing efforts for the 2010 census shift into high gear, the U.S. Census Bureau is paying particular attention to what they say is one of the hardest-to-count segments of the national populace: 18 to 25 year-old people of color, especially young men. (Read more)

The Pew Hispanic Center released a report about the values, education and employment of Latinos 16-25. They have high rates of teen pregnancy, gang affiliation and school dropouts. (Listen here)

During the 2000 Census, Kenneth Prewitt’s mother proudly informed him that she had performed her civic duty: She filled out her Census form — twice.

That’s not what Prewitt, director of the Census Bureau at the time, wanted to hear. (Read more)

‘It’s very possible that some African-Americans or Spanish speaking persons were under-counted in previous Census because there may have been some belief that making face-time with the government was not in their best interests,’ acknowledges Arnold Jackson, chief operating officer for the decennial Census. (Read more)

NEW YORK (CNNMoney.com) — The nation is becoming even more diverse: More than one third of its population belongs to a minority group, and Hispanics are the fastest-growing segment.

The U.S. Census Bureau reported Thursday that the minority population reached an estimated 104.6 million – or 34% of the nation’s total population – on July 1, 2008, compared to 31% when the Census was taken in 2000. Nearly one in six residents, or 46.9 million people, are Hispanic, the agency reported. (Read more)

Projected to cost $14 billion, Census 2010 is the most expensive ever in the nearly 220-year history of the population count. The bureau is also getting $1 billion from the federal stimulus package to augment operations, including increasing outreach efforts to minority communities and hard-to-reach groups. (Read more)